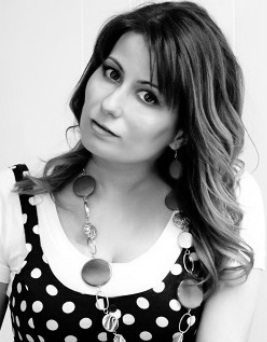 Hi everyone,
my name is Annie and I would like to welcome you to the official website of my first chapter book for children- " Woolly".
"Woolly" is a story about a small woolly bear caterpillar who thinks big, until a question of his identity is raised. In combination with an unfortunate event that involves what marks him as an outsider, Woolly faces a dilemma every child faces in life. With the help of his two friends Neil the Snail and Lydia the Ladybug, Woolly takes a journey to find his place in the world. It takes nothing less than a bee royalty, a vegetarian sparrow and a mysterious advisor to make him realize his purpose. Unfortunately, someone loses a whisker along the way but there is a happy ending. "Woolly" is also a story about loss, friendship, growing up, but it is mostly a story about bravery. Bravery, to face your own fears and then face the world. It is a story about standing proud and tall because of who you are, no matter what everyone else thinks.
The "real story" of "Woolly" began in 2007, when my children found in the back yard the most adorable insect I've ever seen- a woolly  bear caterpillar. Where I come from (Bulgaria), I have never encountered a caterpillar like that and I was fascinated with it. I was never very fond of bugs, but this little woolly bear won me over. The same day,I began the first manuscript of Woolly.
It took me 6 years and a lot of editing to walk the path that brought me from a picture book to a chapter book. I hope you enjoy reading it as much as I enjoyed bringing it to life for you, and hopefully along with the funny story, you will learn some interesting facts about this fascinating creature- the woolly bear caterpillar. “Woolly” is my first chapter book; however, I have 2 other finished manuscripts ( and a couple in the making), so I am really hoping to have more interesting books for you in the future.